From Tradelands Wiki
Jump to navigation Jump to search
Dragon 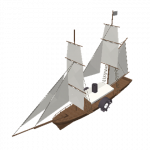 Shipwright says... The Dragon's steam engine makes her able to travel quickly in any direction. Press E to toggle steam engine on and off. Requires coal to use engine.

The Dragon is the first Steamship available to craft at the Shipwright, allowing for fast travel against the wind direction. While its ability to trade is essentially null, its versatility and excellent maneuverability provide for a capable transport. As a combat ship, the Dragon is lacking in firepower and outclassed by more capable ships with stronger broadsides and hulls, however its quick steam engine does give it a unique trait that still gives it some merit.

Retrieved from ‘https://tradelands.net/w/index.php?title=Dragon&oldid=3558’
Category:
Hidden categories:
Cookies help us deliver our services. By using our services, you agree to our use of cookies.